Concert Grounds at The Mall of Asia, Manila, The Philippines, March 14, 2009 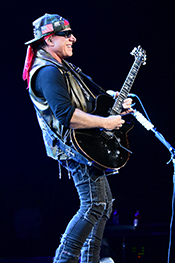 On the next broadcast of Live in Concert, we’re going back to Journey’s “Revelation” tour.

We’ll listen to a legendary concert captured live at the Concert Grounds at The Mall of Asia in Manila, The Philppines on March 14th, 2009.

It was a homecoming for Journey's new lead singer Arnel Pineda, and he dazzled the crowd with an exceptional performance!